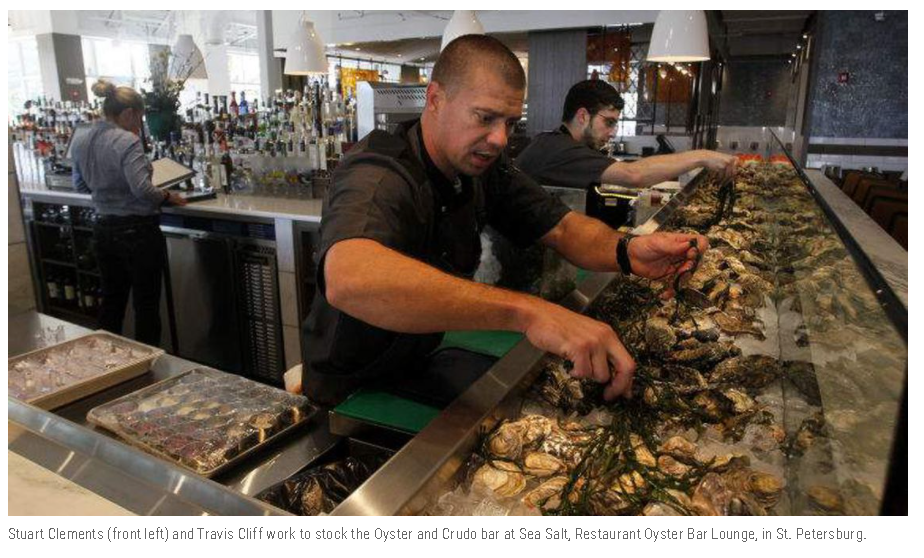 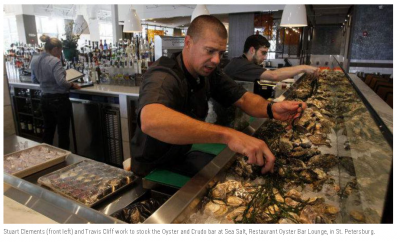 St. Petersburg restaurants have reported monster numbers for high season already, with low gas prices, a more robust economy and astoundingly lousy weather elsewhere contributing to a noticeable uptick in tourist numbers and even the frequency with which locals eat out. In short, business is booming for St. Pete restaurants, both downtown and along the growing Fourth Street N business corridor. In the past couple months we’ve seen the debut of Noble Crust, Cali Tacos, Sloppy Pelican, Station House, Locale Market and Engine Rose, as well as new bars such as Sawgrass Tiki Bar (relocated from Tarpon Springs) and Alvin’s Lounge. The next couple months are poised for a further avalanche of St. Petersburg newcomers.

Sea Salt opened quietly on Feb. 2 after a week of “friends and family” dinners. Fabrizio and Ingrid Aielli’s first Sea Salt debuted in Naples in 2009 and quickly became one of the hottest fine-dining restaurants in town, nabbing a place on Esquire‘s list of best new restaurants in the nation. They turned their sights on St. Petersburg and built out a 12,000-square-foot space on the upper level of Sundial. The focus is on seafood in a style they call “Venetian world cuisine,” the menu supported by a 7,000-bottle wine tower and a display of some of the world’s most exotic and rare salts (thus, the name — no Morton here). Spending $4.5 million on the project, the Aiellis have fashioned a glamorous setting in which to sample raw bar items with a range of Pacific oysters, formal caviar service and grilled fish and steaks. Entrees range from the mid $30s to near $60, and a separate bar menu runs later in the evening in the lounge, with live music on the weekends. 183 Second Ave. N; (727) 873-7964.

JusThai debuted at the beginning of the month, a second outpost of a South Tampa staple for quick Thai standards. It’s a customizable approach, whereby you choose your veggies, protein and preparation. It’s mostly a to-go place, an easy mid-week healthy and affordable meal. (Full disclosure: My daughter worked at the Tampa location last year.) 3201 Fourth St. N; (727) 201-8999.

Locale Market’s tiny FarmTable Kitchen began serving guests on Feb. 6. Showcasing an eight-course menu paired with wine and other drinks, envisioned by celebrity chefs Michael Mina and Don Pintabona, this 8-seat communal table is on the northwest corner of the shopping plaza’s second floor. There is an online ticket system for reservations. Each ticket is $105 per person, plus state sales tax and a 20 percent gratuity, and tickets must be purchased two at a time. The menu is entirely different from the small-plate menu served at Locale’s wine bar and will change weekly; for now dinner service is Thursday, Friday and Saturday evenings. 179 Second Ave. N; (727) 523-6300.

Gabe Thomas opened his progressive little Gush Juice bar Feb. 7. Former military, he turned to juicing after three surgeries for an intestinal disease. With juicing, he says he took his recovery time down from an estimated 18 months to six. Right next to IAmFitness (go where the audience is), he’s doing a range of cold-pressed juices (the Sucker Punch: beet, carrot, ginger, orange and green apple), nitrogen coffee and cold-brewed coffee. He’s also tinkering with a number of new sports drinks. 1100 Fourth St. N; (727) 895-4874.

On Feb. 9, Ruth’s Chris Steak House opened its 144th location directly opposite Sea Salt. The upscale steak chain, renowned for its sizzling platters of tender filet mignon napped with just a smidge of butter to truly gild the lily, celebrates its 50th anniversary in 2015. Historically, Tampa has had the lion’s share of notable steak houses (Bern’s, Charley’s, Shula’s, Fleming’s, Capital Grille, etc.), St. Petersburg less so (Rococo and not much else). Perhaps this marks a new era for carnivores in Pinellas County. Diners can tuck into prime steaks on those 500-degree platters, but there are a number of other options: With broad patio seating, there is a daily “Sizzle, Swizzle, Swirl” $8 happy hour, a series of five-course wine and cocktail pairing dinners, a seasonal three-course menu starting at $43.95 per person and a range of meeting-appropriate private dining options. 131 Second Ave. N; (727) 821-4139.

St. Pete sushi fans have certainly cooled their jets in the long lines that can form outside Hook’s at 1210 Dr. Martin Luther King Jr. St. N. Despite founder Houmpharh “Hook” Atsavinh’s untimely death in 2009, Hook’s continues to go strong, with a plan to open a second location imminently on Fourth Street N in the old Mang Sushi spot. Just a few miles from the flagship, the much larger space will offer a similar menu. 7900 Fourth St. N.

The ill-fated Hip Hop Soda Shop has sat empty for ages, but at the end of the month will open as Pericos. Owner Enrique Rebolledo has had a successful, and gargantuan (more than 600 seats), restaurant in Cancun, Mexico for nearly 40 years. But business has flagged there and his sights have turned to bustling St. Petersburg. With a Day of the Dead decorating motif, the cuisine is regional Mexican. 8901 Fourth St. N; (727) 954-3464.

In Orlando, foodies swoon over Mama Ling Ling’s Thanksgiving sandwich at Pom Pom’s Teahouse & Sandwicheria: sliced turkey, ginger-cranberry chutney, Gouda, stuffing, mashed potato, cream cheese and a side of gravy. Pom Moongauklang, chef-owner of the cult favorite Pom Pom’s, sold the franchise rights to retired deputy Tom Woodard, who will open a second outpost of Pom Pom’s at the end of the month (it’s been a long time coming due to permitting and building issues). The basic idea is East-West fusion sandwiches in combinations that might make one skeptical (pulled pork and peanut butter), served in a funky setting. 2950 Central Ave.; (727) 873-6992.

In the former home of World of Beer and the short-lived Social, Pietopia will debut in the already pizza-heavy Fourth Street N corridor. Owner Joe DiBartolo and controversial chef Domenica Macchia are taking pies in a new direction, though, with a rigorously farm-to-table mission and something called “meter pizzas,” measured out and baked on wooden boards, big pizzas that serve a crowd and carry a commensurate price tag ($50-$75). 5226 Fourth St. N.

The Blue Goose, an EDGE District whiskey bar, has been a long time coming with permitting and buildout, but word is air-conditioning just passed inspection and they are into the home stretch. With church pews upcycled as seats to sip in under the watchful eye of taxidermied hunting trophies, it looks to be a fresh new concept and a welcome complement to St. Petersburg’s beer focus. 49 Dr. Martin Luther King Jr. St. N.

Don and Gwen Arvin opened their charming little Casita Taqueria a few years back on Fourth Street N, but the neighborhood cult fave had to relocate to make way for Trader Joe’s. They found a new home at 2663 Central Ave., but still wanted to have a presence up on Fourth. Aiming to open up at the end of April, they’ve found a location in the vacated DeNunzio’s Pizza spot, renovated to have their signature whimsical Mexican folk art motif. Will it be the same menu as the Central Avenue location? Don Arvin says, “We’ve got a few surprises coming. I’m not ready to release the Kraken yet.” 2701 Fourth St. N.

I’ve always been a big fan of Andy Salyards’ Grand Central District Urban Brew & BBQ (oy, the mac and cheese), and unsurprisingly this can-do guy will debut a second concept, Urban Comfort brewpub, nearby, with a target opening for April or May. Inside a former auto detailing shop, it will feature a short lineup of house beers married with a comfort food menu (housemade tater tots, braised pork belly sliders, chicken pot pie). 2601 Central Ave.

Stillwaters Tavern, the collaboration of Robert Sanderson, Dyce Craig, Lee Karlins and Top Chef contestant Jeffrey Jew (all of BellaBrava), is poised to open in May or June in the just-demolished Bruce Watters Jewelers space. The 260-seat indoor/outdoor restaurant will focus on draft and local craft beer, as well as bourbons and whiskeys, and a wines-on-tap program. Visually it will feature black steel and reclaimed wood and warehouse-style windows with chicken wire, with an eight-person chef’s table overlooking the open kitchen. Jew’s menu will feature contemporary American comfort foods with a focus on local sourcing. 224 Beach Drive NE.

Hofbrauhaus will open in the historic Tramor Cafeteria (built in 1929 and formerly owned by the Tampa Bay Times) in June. The Chicago-based company has locations in Chicago, Pittsburgh, Las Vegas and Munich. It will be beery fun, with German standbys such as schnitzel, wieners, Bavarian potato salad, sauerkraut, spatzle and strudel. 123 Fourth St. S.

The tiny Sunspot Café closed and in its place the Cider Press Café will open in June or July. The first outpost of Cider Press in Naples wows locals with its Florida-inspired, plant-based, modernist cuisine. Food is 100 percent gluten free, no animal products and not heated. In other words, this is raw and vegan, with dishes like a “ceviche” of marinated abalone mushroom, or a Mediterranean Platter of smoked veggie and kofte kebab, pumpkin seed-cranberry dolma, hemp tabbouleh and tzatziki sauce. 601 Central Ave.

The Ciccio crew (Jeff Gigante, Luis Flores, the Lanza family and David Pullman) just keep going, this time bringing a Fresh Kitchen and Daily Eats side by side up on Fourth Street N in the Lee Garden Chinese Restaurant spot, scheduled to open in July. The former is a concept they debuted in South Tampa in 2014 (all-in-one customizable meals, whereby you pick a protein, carb, veggies, garnishes and sauces, then pair it with a super healthy cold-pressed juice; mostly to go) and the latter is much more of an American comfort-food concept that has had a long run on S Howard Avenue in Tampa. With a successful Ciccio Cali already in the Northeast Publix plaza, this will just add to their growing empire. 4447 Fourth St. N.

Demolition has started to make way for the Dog Bar, which aims to open this summer in the Grand Central District. The original dog-friendly bar was in Charlotte, N.C., (tagline: Sit. Stay. Drink.), but St. Pete pet owners will definitely warm to sipping something while dogs play off leash. 2300 Central Ave.

NextSit, stay, drink: What to expect from the soon-to-open Dog BarNext