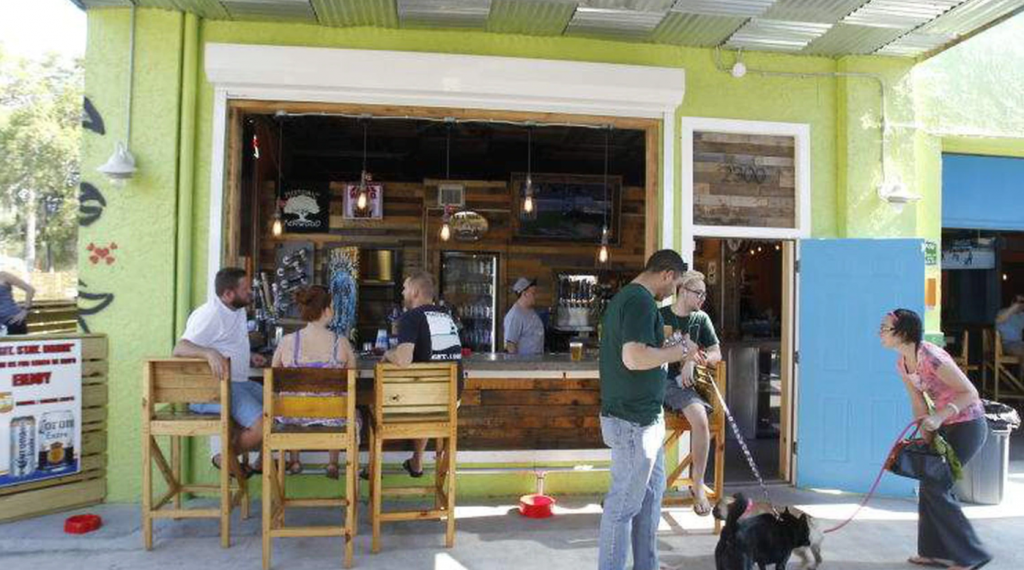 By Justin Grant, tbt* correspondent
Published May 19, 2016
If you have kids, I’m sure you’ve noticed that theme parks and amusements centers invariably serve alcohol. Have you ever had a pitcher of beer at Chuck E. Cheese’s? I have, and I don’t have kids. Long story.
My girlfriend and I do have a dog, though. Every once in a while we drag him out to a bar, which is exciting to him for approximately 10 minutes, after which he remains in a near-comatose state of boredom for the duration. It reminds me of a particularly dreadful bring-your-kid-to-work-day that I went to with my dad, which — if my childhood memory is accurate — involved him soldering something in silence for 16 hours straight.
Dexter would rather be in a dog park, but I’d rather be drinking beer that doesn’t have to be wrapped in a paper bag. Lo and behold, a solution has come to St. Petersburg, unambiguously named: The Dog Bar.
If, like me, you assumed The Dog Bar was just a particularly dog-friendly bar, you’d be half-correct. The Dog Bar is dog-friendly in the way that Chuck E. Cheese’s is kid-friendly — it’s really for them, but there’s booze to fuel the adults while the little ones run wild.
The Dog Bar has done one better by making its bar substantially pleasant, with enough amenities to make it appealing even to the dogless.
The Dog Bar is huge — much bigger than it looks from the street. Built into an old auto-body shop, the orange and green interior of the Dog Bar has a very open feel, thanks to a row of open roller shutters that keep things nice and airy. Around the central bar is what amounts to a large playplace for dogs. There are paintings everywhere; can you guess what they depict?
The entrance and exit to The Dog Bar is a two-stage, dog park kind of deal, which seems like a fanciful touch until you realize that no, this is actually serious. The main front patio, interior, and under-construction back patio are all strict leash zones; if you want to let your dog run free in the leash-free zone — which includes artificial turf, ramps and small bone-shaped swimming pools, if you can believe it — you’ll need a copy of your dog’s vaccination records and a membership ($40 a year for the first dog; $20 each for the rest).
The entire thing is on a 5,000-square-foot plot. I mentioned it before, but it’s darn big, which is kind of a necessity when the plan is to fill the place with dogs and people alike. There’s enough handmade wooden furniture (including a really cool booth/lounge area in the back) to seat dozens, and that doesn’t even include the carabiners at the foot of the bar for hooking up a leash while you work on a pint.
Speaking of which, the drinking part of The Dog Bar is given the equal attention implied in the name. There are 24 beers on tap, including many local brews. For example, there’s a tap for rotating “brewer’s choice” selections from Clearwater’s Sea Dog brewery. It was a honeydew Kölsch when I visited, though the selection changes, based on availability. Two additional taps hold cold-brew coffee on nitro from Tampa’s Commune + Co., as well as a house-made Tito’s Moscow Mule.
There are a couple of house wines, as well as a modest selection of spirits. Placards on the bar advertise house cocktails, but they’re just the basic cocktail cards sent out by liquor distributors and not actual house drinks. I ordered one anyway: the Washington Apple, which differs from the classic shot in that it uses Crown Royal Apple instead of Crown plus DeKuyper, as well as being served on the rocks. Pretty tasty, actually, if you don’t mind sweet drinks.
I’ve got to say, this is a brilliant concept. Next time we take the dog to a bar, why not make it a place where he can play with other dogs instead of just moping at the base of our bar stools? At $40 a year it’s about $40 more expensive than just going to the regular dog park, but there’s lots of beer at this one — and TVs and board games and … just sign me up already.
— jg@saintbeat.com; @WordsWithJG.